Realme 6 features and specification in kenya

The price of Realme 6 in Kenya is 28,500 shillings. The phone features a 6.5 inches display Android 10 and a Mediatek MT6785 Helio G90T chipset. It also comes with a 64 MP camera and a 5300 mAh battery. Buy Realme 6 in colors Comet Blue, and Comet White today at Phoneplace Kenya.

Realme 6 specs and price in Kenya

Right off its box, we can say that the device is fairly large at 6.5 inches. Unlike the Realme 6 Pro, the punch hole only houses a single 16-megapixel front camera instead of a dual setup. It also has a metallic frame for a premium look and feels. The left side houses are triple card tray, with slots for two nano-SIM cards and one micro SD card as well as the volume buttons. The right side is furnished with a fingerprint scanner that also acts as the power button. 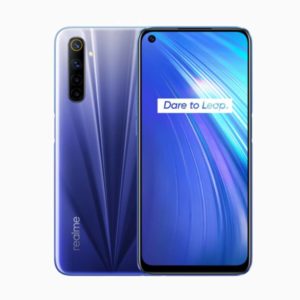 Buttons are cliquey while the fingerprint scanner/power button is placed towards the center of the frame, which makes it easy to reach. At the bottom. We have the headphone Jack, the main microphone, USB-C port, and loudspeaker. Checking out the back. It’s made of plastic with a pretty simple gradient design. It’s quite reflective, therefore, a smudge and fingerprint magnet. But Realme has provided a case. Visit this product’s official website here

Now looking at the details of the 6.5-inch display, it uses a nice IPS LCD panel with irresolution 2400 by 1080 or equal to 405 PPI. Viewing angles are good. Colors are accurate, but brightness is not as high as we would have preferred. But what makes this device special is the smooth 90 Hertz refresh rate. A 90 Hertz refresh rate in a mid-range smart for at this price tag, it’s uncommon. It’s a visually pleasing experience while you’re navigating the UI or scrolling through articles or social media.

Realme didn’t fail on their promise that the Realme 6 is a great phone for gaming as the Helio G90T provides great performance for heavy graphics games. Benchmark scores are pretty high for a phone at this price point. Running the software department is Realme UI based on Android 10. It’s a clean and pretty UI that’s easy to navigate. It has features such as system colors, animations, new wallpapers, icon customization, and system-wide dark mode to name a few.

For rear cameras, they’re going to be six and have got four of them. That’s a 64-megapixel main sensor, an 8 megapixel ultra-wide, 2-megapixel macro, and a 2-megapixel depth sensor. Let’s set up nice and versatile as we have ultra white and macro cameras, both of which have proven to be useful. Quality from the rear cameras under bright light conditions are pretty great as we get vibrant colors and sharp detail. Keep an eye on the dynamic range which can be better.

For low light, it performs pretty well with the night mode feature in certain situations. But without it turned on, it’s generally an average performer in low light. Now checking out the front camera it’s frankly, slightly below average. While details appear sharp the Realme 6 front camera does not deliver accurate colors. Especially for skin bones, which is a very important aspect for selfies. But generally, they’re going to be a success. Cameras pass the litmus test for a decent mid-range smartphone.

Now for battery, the Realme 6 packs, a 4,300 mAh capacity, which is great considering that you will be using this phone for taking lots of photos and lots of gaming. The battery can easily last you a whole day of moderate usage. That includes a bunch of gaming throughout. In standard video loop tests, it scores 18 hours and 52 minutes of playback. And thanks to the Fast charging 30W 0% to 100% percent only takes less than one hour.

Check out Realme smartphones in Kenya

Be the first to review “Realme 6” Cancel reply