NB: Prices are subject to change without notice

The price of the Realme Band in Kenya is 2,999 shillings. The Band features a Large Color Display display, Real-time Heart Rate Monitor, and Smart Notifications. It also comes in three color options namely Black, Green, and Yellow. You can buy Realme Band in Kenya today at Phoneplace Kenya.

So like other fitness bands, the Realme Band sports, a very discreet design. It’s super lightweight, 30 grams. You barely even feel it when it is there on your wrist. And compare it with many fitness bands, it’s impressively slender as well. A lot of them are quite chunky. But this one barely juts up above your arm at all.

And those comfort levels are aided by a soft silicone strap, as well as you can actually grab it in three different colors. This is the green, you can get it in a nice, vibrant yellow, otherwise also a standard black. It is black that’s going to go with basically any kind of outfit. And the Realme Band is also IP68 water and dust resistant.

Like the Honor band 5, the Realme Band rocks, the screen that’s just under a 1-inch in size. Definitely tiny don’t be fooled by the black grounds. There’s definitely some very thick bezel action going on around here. If you do find these struggles with some of those smaller texts, then you might not want to look at a fitness band. To be honest, you might be better off with a smartwatch.

Something like the Huawei Watch GT. Now, maybe dinky, but at least that text is nice and legible. The no problem with the resolution or anything. And the colors are actually quite punchy as well. The only problem is there’s no Always-on-display option. But thankfully the raise to wake does work perfectly well.

And a lot of other features that you’d expect from a modern fitness band are present and correct here on the Realme Band included, of course, a good bit of 24–hour heart rate monitoring. And of course, you can dive into that Realme link app you can get a real-time readout of your heart rate over 24 hours, your current step count, things like that. Again, it’s fairly basic stuff compared with some rivals from the likes of Garmin, but it’ll do the job if all you want is a basic motivational tool to get out and get active.

And you’ve got some simple sleep tracking on there as well, pretty much a mandatory feature these days. Although again, very, very basic just tells you how much light sleep and deep sleep you’ve apparently had it. Doesn’t actually tell you when you’ve woken up during the night. Visit this link which is for the product official website.

Brightness we find it is just about strong enough for me to clearly see what was going on on the Realme Band when outside in strong daylight. Although you might occasionally have to give the screen a bit of a wipe first, get some of that finger grease off. And if you want to change any of these wallpapers on the Realme Band, you can’t do it through the actual band itself.

You’ll have to dive into the Realme link app and then do it through that instead. That’s where you’ll be able to fiddle with the likes of the screen, brightness, the raise to wake feature and the do not disturb. And then here, you’ll also be able to change up a watch face on your brand as well. Although unfortunately, it’s a rather limited selection. You’ve literally got five to choose from and that’s. 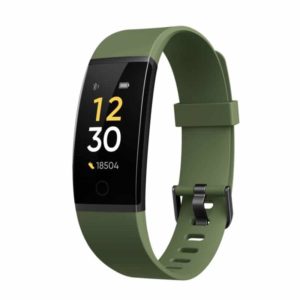 And it’s a very basic interface, which is kind of necessary really because you don’t actually have a touch screen display here. You’ve just got this one little touch-sensitive area down beneath which you can use the cycle through all the various menu options. Then if you actually want to select something, you just long press.

So let’s move on to the fitness tracking. And there actually 9 different types of exercise that you can track using the Realme Band. You’ve got runs, walks, hikes, yoga, generic fitness, cycling, spin, and, and completely random crickets. But knowingly you can only store three of these exercise options on the Realme Band at any one time.

If you want to put a different one on there, you’ll have to go to the apps, what part, one of the old ones, and put a new one in its place. And during the workout, you’ll get some very basic information as well. How long have you been gone for, your BPM, and your maximum BPM, and also how many calories you’ve burned? I’ve got, I see it, the readout on the calorie burn is incredibly pessimistic on the Realme Band.

You also a basic bit of notification support as well. With full customizations, which is exactly which apps will buzz your wrist to let you know that something is happening. It is very basic. Remember, it’s a very small screen. There’s only a tiny bit of information you can actually get at any one time. It can only show you one notification. So if you get a few things buzzing through all at once, then a lot of it will get lost in the fog. So it’s definitely not a feature that you can depend on.

Besides a lot, you also get a find my phone feature and a stopwatch, which works absolutely fine as you would expect. But that’s it, there are no media controls. So unfortunately if you listen to a podcast or music, whatever on your phone. You can’t pause it or skip a track or whatever via the Realme Band.

And as for the battery life. Well, it’s comparable here on the Realme Band to most of the rivals from the likes of Honor and Fitbit. You’ll get around 5 to 6 days of full use, 24-hour heart rate monitoring and everything well before it will need a recharge. And when you want to charge it back up again you do have to yank its bit of the strap out from the top of the Realme Band.

You will see that cleverly reveals the bit that you need to shove it into a USB port in order to get the Realme Band charged back up again. They can actually have that straight into any plug adapters you’ve got lying around or otherwise direct the, into the USB port of a laptop.

Be the first to review “Realme Band” Cancel reply