Samsung Galaxy M01 smartphone was launched in 2020, June 02. Its price in Kenya is 13,000 shillings. Galaxy M01 is a budget smartphone that features a 5.7 inches display, Android 10, dual 13 MP camera, 32 GB storage and a 4000 mAh battery. It is available in colors Black, Blue and Red. Buy it at Phoneplace for the best price in Kenya.

At this price point, it is a surprise that Samsung included a 2.0, Type-C 1.0 reversible connector USB on Galaxy M01. Maybe South Korea has finally decided to pay attention to the needs of customers at this price range. Usually, you would expect a micro USB. But of course, Samsung Galaxy M01 has a Glass front, plastic back, and plastic frame for its build. This we can excuse it for notwithstanding it being the very thing we would expect. At 147.5 x 70.9 x 9.8 mm in dimension the phone weighs about 168 grams.

The M01 by Samsung is a phone with a simple yet complete look, feel, and design. This statement is prompted by the fact that the phone comes with a speaker on the front and another on the back. You can see the speaker grill on the bottom back section of the phones. Speaking of which there is Samsung branding on the back panel and that dual camera setup on the top left corner. Okay, that which I have called a speaker on the front is the phone’s call speaker. Samsung Galaxy M01 is available in colors Black, Blue, and Red.

We have come to terms with Samsung’s move to disband the usage of IPS panels on their phones. In that spirit we see the company go for a PLS TFT capacitive touchscreen on Samsung Galaxy M01 even as it did on other models like Galaxy A21s. The display we are looking at here is 5.7 inches, 81.1 cm2 panel. One with support for 16M colors and with a 720 x 1520 pixels resolution. This Infinity-V display does also have a ~295 PPI density and that tall 19:9 ratio. Samsung speaks of it as a “Dazzling Display.” 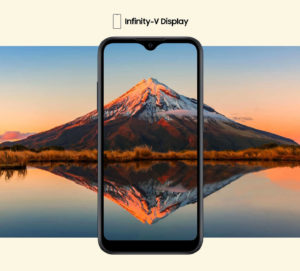 What internal storage do you ask? Well! Galaxy M01 has 32GB of internal storage and surprisingly 3GB of RAM. Still, with an SD card you can expand this internal storage up to 512 GB because even on paper, 32GB storage can be limiting. The Galaxy M01 also has an additional feature in Face Unlock which seems to be a substitute for a fingerprint scanner which is lacking here. (See also Nokia C2 Tennen).

Actual battery life may vary depending on the network environment, usage patterns, and other factors. But Samsung Galaxy M01’s 4000 mAh battery should last a whole day of usage with ease. Samsung Galaxy A21 also has a 4000 mAh battery you might want to check it out. With this battery, you get to watch videos non-stop for up to 16 hours. *Results based on Samsung internal test lab conditions for offline usage. Hours may change based on individual usage. Source.

The latest Samsung Smartphones in Kenya

Be the first to review “Samsung Galaxy M01” Cancel reply