As you already know, Apple held its usual  September 18 event, where they announced the new Apple Watches and new iPads. In the unboxing of the Watch Series, 6 gets the same packaging as a previous generation Apple watch. But this time you’ll notice a few things missing. It does have the cable that you need. But no USB wall adapter. This is now sold separately. Apple notably tucked that into the environmental section of its presentation.

This new Apple watch series 6  is a perfect combination of powerful features and a beautiful design. I think it is safe to sit this Series as Apple’s most colorful lineup ever. There’s a new blue aluminum case, an classic gold stainless steel finish, a new gray black stainless steel called graphite, and for the first time a stunning new Apple watch product red. The only real change that you will notice is the colors. And that’s because that’s the only real change on the outside. The materials are the same as Watch Series 5, and the sizes available are also the same in 40mm and 45mm.

On the inside, the Apple watch series 6 is packed with incredible technology including a new health sensor that enables amazing new capabilities. There are a new S6 chip and a couple of new sensors. So the S6 chip really is simply the Apple Silicon team continuing to make strides. They have always been good with an efficiency that we can testify judging from previous gen watches. . It includes a high-performance dual-core processor based on the A13 Bionic and iPhone 11, but optimized for Apple. Watch the S6 is up to 20% faster than the previous generation series six also has great new features.

Also on board is Apple’s very own watchOS 7.0 To be honest, Apple has really tightened up a lot of the animations. It feels much snappier and faster because the animations are shorter. But really, I think that was the goal is to keep the battery life at a day and a half, because that’s important. Speaking of which that dual-core chip I mentioned earlier cranks up the always-on-display to be twice as bright as the series 5 and keep the same battery and performance.

There is a new blood oxygen sensor. Those new sensors, I mentioned. You can kind of see if you’re looking at the bottom of the watch or if he fired up and start to do a new measurement. It uses infrared photography to measure the color and therefore the percentage of oxygen in your blood. Advanced algorithms use this data to calculate the color of your blood which indicates the amount of oxygen present. The new blood oxygen app lets you take a measurement in just 15 seconds. The watch captures periodic background readings and stores them in your health app. 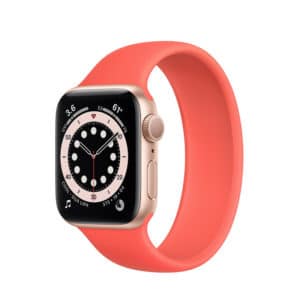 Also, if you’re wearing your Apple Watch Series 6 to bed, it can record background measurements while you sleep. Blood oxygen saturation also known as SPO2 is a vital sign. It’s a key measurement that contains critical information about your breathing and circulation. Check our this product’s official website for even more details.

Probably what is more interesting than the watch itself are these new bands Apple announced. These are some stretchy, they call them solo loop bands. Fitting is really important with these. So to get the right one, they have a fitting document on their site. You can put it on just by stretching it over your wrist every time. This watch also has another feature that will appeal to mountain climbers, hackers, and the likes. Apple Watch Series 6 features the new always-on altimeter that provides continuous elevation throughout the day. With it, you can see your elevation change in real-time, right on your watch face.

Apple also collaborated with the artist Geoff McFetridge to create a unique piece of art for your watch. There are thousands of combinations that animate when you raise your wrist. Now to wrap it up, we are convinced that the Apple Watch Series 6 is the best Apple watch yet. Be sure to also check out the Watch SE on our website.

Check out Apple devices in Kenya

Be the first to review “Apple Watch Series 6” Cancel reply