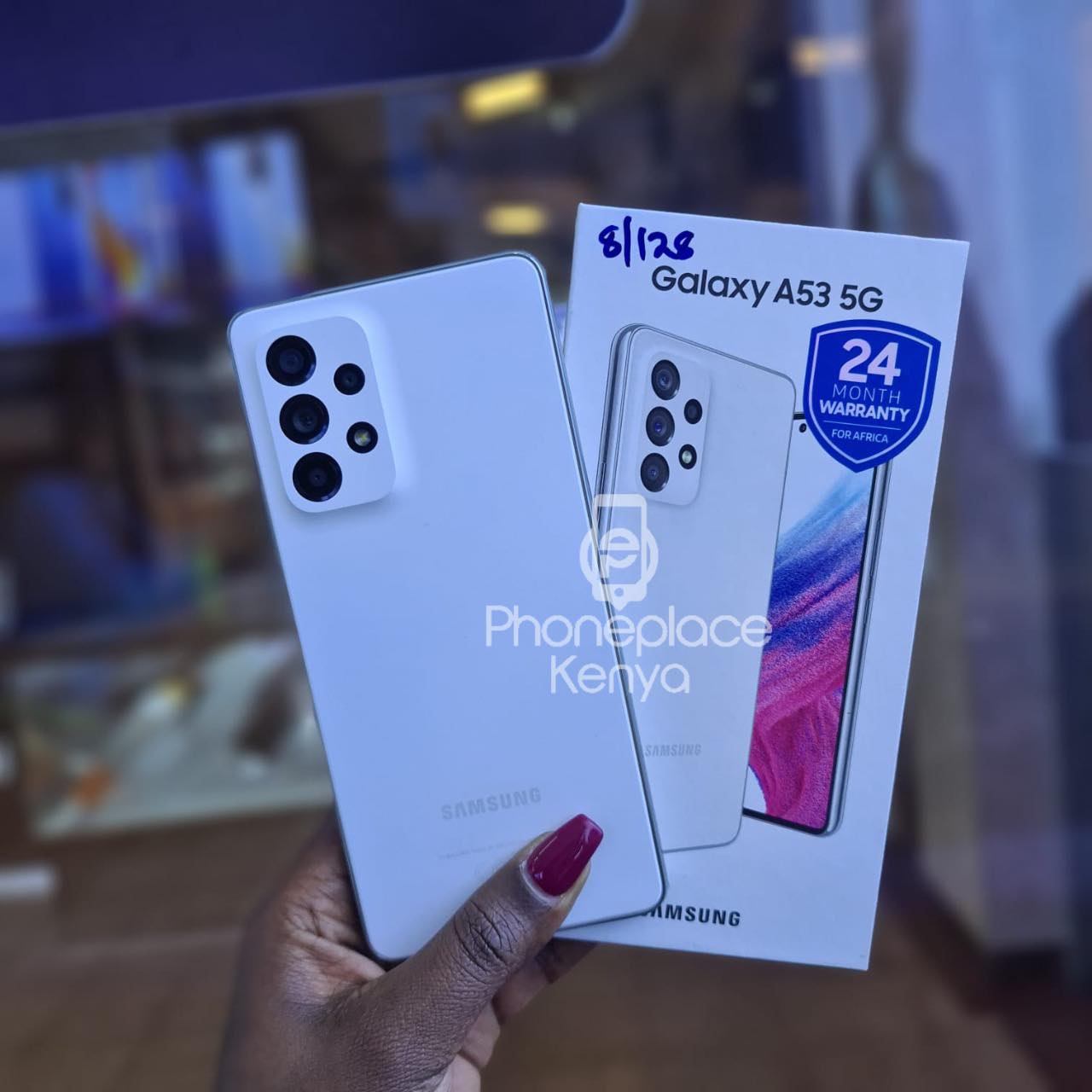 The Samsung Galaxy S22 Ultra is one of the latest premium smartphones released to the mobile phone market. The 5 G-enabled S22 Ultra was announced and released to the market in February 2022 and is an epitome of class, elegance and luxury. It measures 163.3 x 77.9 x 8.9 mm and is reasonably heavy at 228g. Samsung Galaxy S22 Ultra is made of a Glass front (Gorilla Glass Victus+), glass back (Gorilla Glass Victus+), and aluminum frame. Currently, the smartphone retails in Kenya for Kes 146,000 shillings. Its high price is justified by its top-tier specifications guarantee high performance and productivity. First, the handset is waterproof and dustproof, with IP68 certified rating.

The Samsung Galaxy S22 Ultra display features a 6.8-inch, Dynamic AMOLED 2X HDR10+ Display. The resolution on the prominent Display is 1440 x 3088 pixels (~500 ppi density), which is relatively high by any standards. The screen’s brightness at peak is 1,750 nitsA 120Hz refresh rate ensures peak performance of the Display. Protecting the Display is a tamper-proof Corning Gorilla Glass Victus+. It has come with a quad primary camera setup comprising 108MP + 12MP + 10MP + 10MP lenses, while the front camera has a 40-megapixel setup for great selfies. The front-facing lens captures up to 4K videos, as the primary camera captures up to 8K videos.

Samsung Galaxy S22 Ultra is a high-performance luxury smartphone. It is currently running on Android 12, upgradable to Android 13, One UI 5. Installed on the Ultra is a Qualcomm SM8450 Snapdragon 8 Gen 1 (4 nm) chipset, which is quite powerful and efficient in enabling the big handset. An Octa-core (1×3.00 GHz Cortex-X2 & 3×2.50 GHz Cortex-A710 & 4×1.80 GHz Cortex-A510) chipset and Adreno 730 GPU complete the processing unit, with the combination working in enabling fast processing of commands, seamless gaming of high setting mobile games, and ease of use when multi-functioning between web pages and applications.

Supporting the powerful processing unit to ensure optimal performance is a massive RAM and ROM. With UFS 3.1 technology to enable high efficiency of the inbuilt storage space, the Samsung Galaxy S22 Ultra comes equipped with four memory space options to choose from:

Powering the massive and demanding high-end device is a Li-Ion 5000 mAh, non-removable. Supporting it to ensure a constant and reliable power supply to the Ultra handset is a 45W wired fast charger, 15W wireless (Qi/PMA) charging support, and 4.5W reverse wireless charging. The Samsung Ultra comes installed with a Fingerprint (under Display, ultrasonic), accelerometer, gyro, proximity, compass, and barometer for ease of use when communicating and using the handset. It supports NFC, 5G network connectivity, USB Type-C 3.2, USB On-The-Go port for fast data transfer and charging, and GPS. Samsung Galaxy S22 Ultra is now available in Phantom Black, White, Burgundy, Green, Graphite, Red, Sky Blue, and Bora Purple. Check it out at our retail stores at Phoneplace Kenya for more information and purchase.

Samsung Galaxy S22 5G retail price in Kenya is between Kes 73,500-102,400. Announced in late February 2022, the S22 phone is worth having if you seek an alternative to the Samsung Galaxy S22 Ultra. It is one of the few top-class smartphones that is compact and true to its high-performance promise. The device fits easily in your pocket, and you can efficiently operate the 6.1-inch screen with one hand. It measures 146 x 70.6 x 7.6 mm and weighs 167g. Note: you can handle it with one hand, but its thinness and weight are worth noting, making it one of the most comfortable phones.

The device is energy efficient, but with intensive use, you sometimes have to charge the battery in between. It comes packed with a 3,700mAh, which should be a concern considering how demanding the device is for power. HoweverSamsung complemented the downside of a small battery capacity with a 25W fast charging adapter, 15W wireless charging (Qi) and 4.5w reverse wireless charging. Samsung does not supply a charger, so you purchase it separately. At Phoneplace Kenya, you can buy the Samsung S22 as a separate device. The smartphone is unlocked, so you use it with a subscription from each provider.

The Samsung Galaxy S22 Plus Retail price in Kenya starts at Ksh 115,000. The price variance is due to the inbuilt memory space on models, with 128GB 8GB RAM and 256GB 8GB RAM models available. You can also choose from Phantom Black, White, Pink Gold, Green, Graphite, Sky Blue, Violet, Cream, and Bora Purple color variants. The Galaxy S22 Plus is the middle device from among the S22 series. It’s almost identical to the entry-level model, the Samsung Galaxy S22 5G, but with a few differences. For example, the Samsung S22 Plus has a large 6.6-inch full HD screen compared to the 6.1-inch display on the S22 counterpart.

The 6.6-inch display is ideal and comfortable while watching a video, but it’s harder to operate the device with one hand. But considering the more prominent display provides a better user experience with 1080 x 2340 pixels (~393 ppi density) resolution and 1750 nits peak brightness, it is worth having. You can take decent shots with the 10 MP, f/2.2, 26mm (wide) front camera. At the back, capture incredible photo shots and 8K videos with the 50MP + 10MP + 12 MP triple-camera set-up.

The larger S22 Plus boasts a 4,500mAh battery compared to the lesser 3,700mAh battery on the S22. You can quickly recharge this battery with a separately available Samsung fast charger. The S22 Plus has enough power for the most demanding tasks and takes razor-sharp photos in any situation. You can buy the Samsung S22 Plus as a separate device. In addition, the smartphone is unlocked. Buy the Galaxy S22 Plus 5G at PhonePlace Kenya.

The Samsung Galaxy M53 5G retail price in Kenya is Ksh 50,000. The handset was announced and released to the market on April 23, 2022, and is now available at Phoneplace Kenya. The Galaxy M53 5G features a 6.7-inch Super AMOLED+ display with 1080 x 2408 pixels Full HD+ resolution and a 120Hz refresh rate. It has a 108MP primary rear-facing camera, supported by an 8MP ultrawide camera, a 2MP depth sensor, and a 2MP macro camera.

A 32MP camera is installed on the front for selfies and video calls. The phone can record 4K 30fps videos using front and rear cameras. Samsung Galaxy M53 5G runs on Android 12, One UI 4.1 OS, and relies on an efficient MediaTek Dimensity 900 chipset, Octa-core CPU Mali-G68 MP4 GPU for optimal performance. The phone has 128GB, 6GB RAM / 128GB, 8GB RAM / 256GB 8GB RAM inbuilt storage on its models, all of which support additional memory through a microSD card (up to 1TB).

The Samsung Galaxy M53 5G retail price in Kenya is Ksh 50,000. The handset was announced and released to the market on April 23, 2022, and is now available at Phoneplace Kenya. The Galaxy M53 5G features a 6.7-inch Super AMOLED+ display with 1080 x 2408 pixels Full HD+ resolution and a 120Hz refresh rate. It has a 108MP primary rear-facing camera, supported by an 8MP ultrawide camera, a 2MP depth sensor, and a 2MP macro camera.

A 32MP camera is installed on the front for selfies and video calls. The phone can record 4K 30fps videos using front and rear cameras. Samsung Galaxy M53 5G runs on Android 12, One UI 4.1 OS, and relies on an efficient MediaTek Dimensity 900 chipset, Octa-core CPU Mali-G68 MP4 GPU for optimal performance. The phone has 128GB, 6GB RAM / 128GB, 8GB RAM / 256GB 8GB RAM inbuilt storage on its models, all of which support additional memory through a microSD card (up to 1TB).

Its retail price in Kenya is around 35,500 shillings. It is affordable for a 5G-enabled handset, and its specifications indicate a powerful, power-efficient, and reliable handset regarding performance. The Galaxy A33 5G runs on Android 12, upgradable to Android 13, One UI 5. Its processing unit consists of an Octa-core, Exynos 1280 (5 nm) processor, and a Mali-G68 GPU. The phone has 128GB, 4GB RAM / 128GB, 6GB RAM / 128GB, 8GB RAM / 256GB 8GB RAMGB of internal storage, which is expandable using microSDXC.

Camera-wise, the A33 comes packed with a front-facing 3 MP, f/2.2, (wide) camera capable of 4K video recording. At the pack, it packs a quad camera set-up consisting of:

Powering the Samsung Galaxy A33 5G is a 5,000 mAh battery. The device comes with a 25W fast charger to aid in powering the battery and meeting power demands.

Another 5 G-enabled device we have is the Samsung Galaxy M23. The device was released on the mobile consumer market and is now available for Kenyan users for Kes 30,000 retail. It supports dual SIM (Nano) and features a fingerprint (side-mounted) sensor alongside accelerometer, gyro, and compass sensors. The Samsung phone has a decent display, as expected of a mid-tier handset. The 6.6-inch TFT display boasts 1080 x 2408 pixels resolution and 120Hz refresh rate.

It is good enough for optimal user experience as the user browses the internet, peruses through numerous multi-media files, and enjoys downtime watching, downloading movies or playing mobile games. Galaxy M23 5G is powered by the Octa-core (2.2 GHz & 1.8 GHz) processor and runs on Android 12, One UI 4.1. The models of the M23 come with either 128GB, 4GB RAM or 6GB RAM and 128 GB of internal storage, expandable using microSDXC.

The back camera on the device features a triple camera set-up consisting of the following:

Samsung Galaxy A32 retail price in Kenya is Kes 33,500. The handset will be available in retail after its announcement and release to the consumer market in January 2022. The handset weighs 205g and measures 164.2 x 76.1 x 9.1 mm. The color variants available are Awesome Black, White, Awesome Blue, and Awesome Violet.

Samsung Galaxy A32 5G runs on Android 12, One UI 4.1. it relies on the efficiency and power of its Octa-core, Qualcomm SM7225 Snapdragon 750G 5G (8 nm) processor and Adreno 619 Graphics Processing. Unit. Enabling optimal performance of the handset is the expandable memory space, consisting of 128GB ROM, 4GB RAM, and 128GB ROM 6GB RAM.

Powering the Samsung Galaxy A32 5G is a Li-Po 5000 mAh, non-removable battery, charged with a 25W wired fast charger.

It runs on Android 12, One UI 4.1, and is powered by an Octa-core, Qualcomm SM8450 Snapdragon 8 Gen 1 (4 nm) processor with several internal memory space options:

In terms of optics, the Samsung tablet relies on a dual 12MP+12MP front camera and a dual 13MP+6MP primary camera at the rear. The S8 Ultra tablet relies on a massive Li-Po 11200 mAh, non-removable battery, which has a Fast-charging option with a wired 45W that charges the battery from 0-100% in 82 minutes.

The tablet features a 14.6-inch, Super AMOLED, HDR10+ display with a 120Hz refresh rate. It comes along packed with quite impressive 1848 x 2960 pixels, 16:10 ratio (~240 ppi density) resolution, beneficial when making presentations and needing the best clarity on images and videos on media. Protecting the 14.6-inch multitouch screen is a tamper-proof Corning Gorilla Glass 5.

A tablet in the class of Tab S8+, a production powerhouse. Part of the bare minimum for such a device is ample RAM and ROM to enable unlimited downloading and storage of applications and files, besides an efficient RAM to run applications in the background. Tab S8+ comes packed with several memory options:

The Tab S8 Plus has a Li-Po 10,090 mAh, which is sufficient considering the size of the tablet and the complexities of its high-performance features and applications. Supporting the battery to ensure a reliable power supply while focused on productivity is a 45W wired fast charger.

Running the Samsung Galaxy Tab 8 is an Android 12, upgradable to Android 12L, One UI 4.1.1. OS. The tab has a MicroSDXC (dedicated slot) and has an inbuilt memory space consisting of:

Tab S8 supports Stylus and 6.2ms latency (Bluetooth integration, accelerometer, gyro). Sensors installed on the tablet are Fingerprint (side-mounted), accelerometer, gyro, proximity, and compass, which aid communication. Powering the 11-inch tablet is a Li-Po 8,000 mAh, non-removable battery. The battery is supported with a 45W wired fast charger, able to charge 1-100% of the battery in 80 min. Available in Graphite, Silver, and Pink Gold colors, Samsung Galaxy Tab S8 retails for Kes 97,000-105,000 depending on the inbuild memory space on the model.